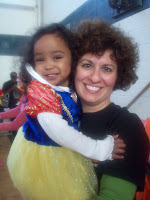 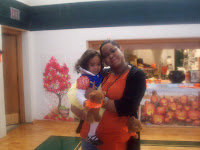 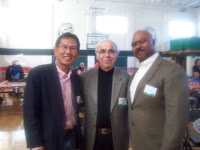 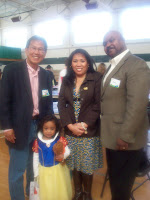 "Better to light one candle, than to curse the darkness." This old adage came to my mind as my family and I attended the St. John Hospital's semi-annual Neonatal Intensive Care Unit Graduate celebration. During this festival, children who began their life journeys with medical problems of every kind, gather together with the medical staff who treated them to celebrate life and all the victories of defying the odds as survivors of premature births.

There would be nothing to celebrate were it not for the hard work and dedication of the St. John NICU staff. Each member of the NICU Team contributes a critical part of the total care package that ensures that NICU babies get the absolute best medical care possible and that parents get the emotional and spiritual support they need during an extremely difficult period. In the deepest valley of a particularly discouraging stage of Victoria's NICU experience, the entire St. John NICU Team (doctors, administrators, nurses, tech personnel and support personnel) guided our family through an almost unbearable situation with compassion, wisdom, and excellence. We knew that the St. John NICU Team was not only treating Victoria, they were also rooting for her and they were encouraging us in a most uncertain and fearful time.

I often asked myself during that period, what kind of people devote themselves to take on the monumental challenge of treating babies born so early with a greatly reduced possibility of survival and a greatly increased possibility of loss and heart break? The answer is really pretty simple - people who care! This care is exemplified to the highest degree in the person of Dr. Ali Rabbani. Dr. Rabbani established the St. John NICU in 1970 when the survival possibilities for premature babies were extremely remote. It was evident from observing him as he interacted with the children who graduated from St. John's NICU and their families that he delights in seeing each and every child and the remarkable progress that has been made in their lives after their NICU experiences. I was deeply touched personally as I considered that every family at the celebration was able to experience the joy of victory over death because of the determined efforts of this man. Dr. Rabbani and his associates, were not content to be satisfied with the status quo of assuming that babies born prematurely were a lost cause, but chose rather to study, investigate, prepare and apply their efforts so that they could beat back the odds and give children a chance who otherwise might have become just another preterm statistic.

The love the NICU team has for what they do and for the ones they treat is the greatest testament to the difference a few dedicated people can make when they choose to light candles rather than curse darkness. Their examples serve a challenge to all of us. Are we willing to apply the very best we have to offer intellectually, emotionally, physically and spiritually in extremely difficult situations? Are we dedicated to strive to be overcomers or good rather than passive bystanders who allow evil to take root when the battle is long and arduous? Are we willing to struggle with the possibility that we may lose in a particular effort to do good on a specific day, but that if we persist at doing what is good and right, all will not be lost in the long run? The St. John NICU staff has lit a fire within my soul to renew my commitment to apply myself without wavering to be committed to do good. It may cost me something in the process, but it will cost others much more if I squander my talents, sit and do nothing. I challenge each of you to commit yourselves to do the same.

This past week, my paternal grandmother, Mrs. Lucille Noble, passed away at the amazing age of 91. She was the last of her generation of our family which included her older brothers and 3 inseparable sisters who were the epitome of what close sisters should be. As is the case with the passing of any pillar of a family, my grandmother's home going brought family members together who had not been in the same place for many years. I was privileged with the honor of officiating her funeral service and was struck by the presence of so many loved ones who had grown up, were raising families and who possessed countless family traits and quirks that served as subtle reminders of a shared heritage and a rich family history. As I interwove my own recollection of how our family history had affected me and my family, I had no idea of how my understanding of my family history was to be deepened and reshaped in a single afternoon.

After the service, we gathered at my cousin Claudine's home for some down home hospitality and serious Southern soul food. As we all talked and laughed and ate, my cousin Frankie began sharing about "a little family genealogy project" he had been working on. As it turns out, his "little" was serious major historical work which he has been pursuing since about 1977 and which had been published. Armed with hundreds of family photos and obituaries dating back years, Frankie began a quest that led him to trace our family lineage to ancestors born into slavery in the mid-1800's, a link extending all the way back to Africa and even to a slave owning ancestor born in the late 1700's! That's right! We have our own Jefferson/Hemmings saga right in out own back yard! We no longer had to guess about where that red-hair originated! It turns out that there was not only a name, but a portrait with a face that displayed features that were clearly definable as ours! Even more incredible was the fact that because this slave owner had no other children, he worked tirelessly after the civil war ended to pass on a part of his wealth to his descendants birthed by slaves he had previously owned! As Frankie shared this spellbinding history, I couldn't help but think of the words of Martin Luther King who in the most famous speech of his lifetime shared the following hope:

I now had historically indisputable facts, not just anecdotes, with dates and names provided, that confirmed that I was both the son of a former slave AND the son of a former slave owner! It also occurred to me that this hidden heritage might somewhat explain the burning desire deep within me to see people of all sorts of backgrounds come together in love, fellowship and harmony - it is literally a part of who I am! Within the blood that runs through my veins there exists both the genes of one who cracked the whip and of the genes of one who endured the scourging! I was reminded of Acts 17:26 which states that "He [God] has made from one blood every nation of men to dwell on all the face of the earth." If we dig deep enough, we will find common roots. This commonality can serve to remind us that those we struggle most to understand and live with are part of a larger human family that shares the same beginnings and are literally more like us than we often choose to believe.

For me personally, the new discoveries of family origin place me in a position to be less likely to assign blame - knowing I have ancestors who helped cause and perpetuate problems blocking understanding and healing - and less likely to claim vitimhood. What a motivation to know that I have ancestors who in full knowledge of where they came from, overcame tremendous odds to produce loving families and wonderful individuals like my grandmother, who raised 3 amazing children - one of them being my father - who in turn overcame his own challenges to go on to raise me. What examples for me to pass on to my children!

Through the serendipitous discovery of personal roots, the Lord has blessed me with a new perspective that has helped to understand more about the complexity of history and its effects on the human spirit and made me more desirous to be a conduit of healing for others. It has shown me furthermore that the love of God can overcome even the most tangled roots! Isaiah 61 reminds us that the Lord desires:

To console those who mourn in Zion, To give them beauty for ashes, The oil of joy for mourning, The garment of praise for the spirit of heaviness; That they may be called trees of righteousness,The planting of the LORD, that He may be glorified.

I knew the weekend would be a return to my roots. I just didn't have any idea it would also be a call to produce better fruit and more glory for the Gardener! So let me challenge you not to be afraid to dig into your past. It will show you just how far God has brought you and challenge you to allow Him to take you even further than you thought you'd be able to go! Until next time...

Sam
Racine, Wisconsin, United States
Sam Jackson is an “Army Brat” who has lived all over the world. His undergraduate education includes attending the United States Military Academy at West Point and receiving a Bachelor of Science Degree from Campbell University in North Carolina. Sam received his Master of Divinity Degree in Cross-cultural ministry from Columbia International University. His ministry experience includes international ministry in Europe, South East Asia and West Africa as well as prison ministry and ministry within the military context. Sam is married to the former Luz Bautista, a veteran missionary licensed with the international missions agency Youth With A Mission with over 30 years of missionary service in her own right. The two of them have served together in church planting and ministries among the poor for almost 3 decades. They have 4 daughters, Coco, Maris, Joana and Victoria. As the Pastor of Hope Community Church, a multicultural congregation in Racine, Wisconsin, Sam's passion is to reach out to all people in Jesus’ name and to inspire Christians to live out their faith in Spirit and Truth and to motivate them to come together across all barriers.